Tez enables developers to build end-user applications with much better performance and flexibility. It generalizes the MapReduce paradigm to a more powerful framework based on expressing computations as a dataflow graph.

The is designed to get around limitations imposed by MapReduce. Other than being limited to writing mappers and reducers, there are other inefficiencies in force-fitting all kinds of computations into this paradigm – for e.g. HDFS is used to store temporary data between multiple MR jobs, which is an overhead. In Hive, this is common when queries require multiple shuffles on keys without correlation, such as with join – grp by – window function – order by.

The Tez API has the following components:

It allows you, for e.g., instead of using multiple MapReduce jobs, you can use the MRR pattern, such that a single map has multiple reduce stages; this can allow streaming of data from one processor to another to another, without writing anything to HDFS (it will be written to disk only for check-pointing), leading to much better performance. 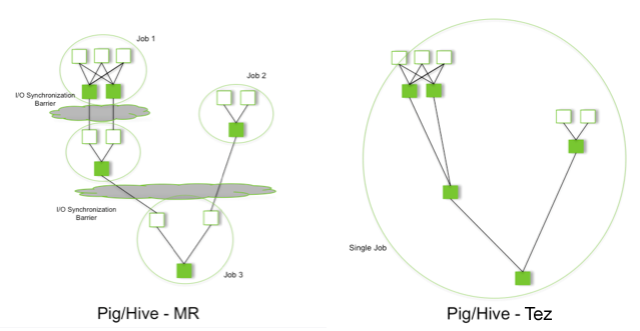 Re-use containers:
Tez follows the traditional Hadoop model of dividing a job into individual tasks, all of which are run as processes via YARN, on the users’ behalf. This model comes with inherent costs for process startup and initialization, handling stragglers and allocating each container via the YARN resource manager.